In the ancient writings, the exotic city of Samarkand was previously named Sogdiana and Marakand. The age of this second largest city in Uzbekistan is around three thousand years. During this three millennia period Samarkand was governed under the reign of Alexander the Great, endured the invasion of Genghis Khan, the governance of Tamerlane and the governing power of tsarist and then later Soviet Russia.

Modern Samarkand is an enchanting city with many unique historical monuments harmonising with sympathetic modern architecture in perfect harmony. Consequently, Samarkand is a living bridge between the ancient and the modern.

This Central Asian metropolis continues to enchant climatically favourable travellers to Uzbekistan. The Samarkand sightseeing tour is the ideal choice for those who want to draw themselves closer to the mysterious epochs and become familiar with the rich cultural heritage of the Uzbek nation. 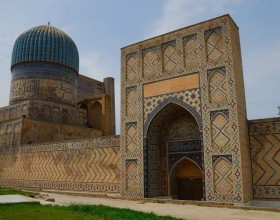 One of the vivid samples of Central Asian architecture is the Bibi-Khanym Mosque, build by the order of Tamerlane in 1404 in Samarkand. The name of the building is literally tra...

Mausoleum of Khodja Daniyar is located on the hills of Afrasiab close to the healing springs. According to archives, the ancient mausoleum was built in the honor of prophet, res... 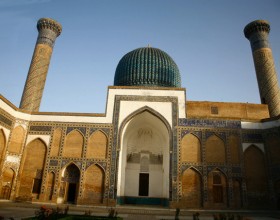 Gur-Emir Mausoleum – one of the main sightseeings of Samarkand. This majestic building was constructed in 1404 in honor of Central Asian ruler of Amir Temur (Tamerlane). The mau...

“Meros” handicraft association was founded in Samarkand with the support of UNESCO in 1996. The goals and aims of the organization is preserve and develop traditional handcrafts... 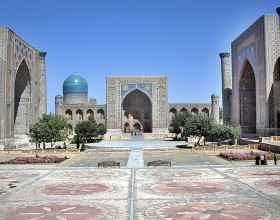 Registan square is located in the center of Samarkand and surrounded by famous architectural ensemble which consists of three monuments: Ulugbek Madrasah, Sherdor Madrasah and T...

Ruhabad Mausoleum was built by the order of Tamerlane on the spot where the respected sheikh and religious activist Sagarji was buried. The name of “Ruhabad” is translated as “r... 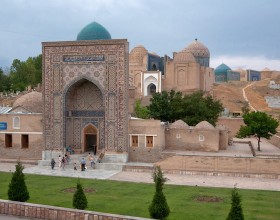 Shahi-Zinda necropolis is one of the ancient and mysterious architectural ensembles of Samarkand. The uniqueness of this memorial complex is in the skillful decoration and amazi...

Ulugbek’s Observatory was constructed in 1428 in the suburbs of Samarkand. The project was developed personally by Ulugbek (a grandson of Tamerlane) and his master, great mathem... 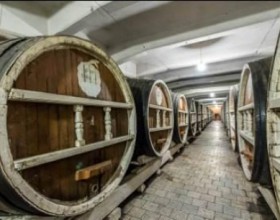 Since ancient times, sunny Samarkand was famous for its vineyards. Each visitor of the city has a unique opportunity to visit legendary wine factory named after Khovrenko. The f...

The mausoleum of Imam al-Bukhari in Samarkand is a very impressive sight. Imam Al-Bukhari was the great theologian of the East. He collected and recorded about 600 thousand hadi...