Ulugbek Madrasah is one of the oldest constructions preserved till our days since the dynasty of Temurids. The madrasah was built in honor of great scientists and a statesman of those times – MirzoUlugbek. He made an invaluable contribution to the development of science and enlightenment in Central Asia. On the doors of Ulugbek Madrasah one can read carved message of the scientist: “The aspiration for knowledge – is the obligation of each Muslim man and woman”. 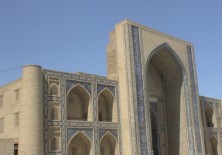