Chashma-Ayub Mazar was built in XII-th century. It was named in an honor of saint Muslim Ayub, who was even mentioned in Bible history as prophet Job. This mausoleum is surrounded by a number of legends, one of which says that during the draughts, locals met saint Ayub and asked for water from him. Stranger Ayub stroke the ground with his staff and a spring immediately appeared from nowhere. In our days Chashma-Ayub mausoleum covers that same spring, as well as the museum of water and an exhibition of national Uzbek carpets. 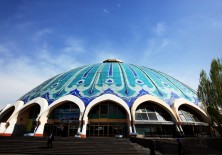